Concerto for Orchestra composed for the Irish Memory Orchestra.

​Commissioned by Clare Arts Office under The Per Cent for Art Scheme.

Tune-book available at the above link. Score/Parts are exclusive to the Irish Memory Orchestra, so not for sale/hire.

It is customary for composers of contemporary orchestral music to write long programme notes explaining the intricate technical details of their music to the audience. I’ve lately abandoned the idea of a technical programme note and instead do something a little more creative. I write Programme Poems.  So here’s a Programme Poem for the Clare Concerto.

The Siege of Ennis

We start with a siege, an imaginary kind
As if Ennis was a town in pre-historic times
Bodhráns sound the slow battle march
That warns us the siege is about to start
From the left come the locals with Bronze Age Horns
Blaring trumpet calls, the enemy to warn
From the right come outsiders led by Carnyx Calls
They meet in the centre. Then there’s a free for all

Reich and Glass go to Tulla

As the siege ends we come back to the future
To Tulla no less where the Ceili Band rules
But in this little tune the Tulla are invaded
By New York Minimalist looping grooves
Philip Glass-style arpeggios are transformed with a lilt
Into hornpipe, jig and reel time tunes
While the harps, guitars, drums and basses
Build a Steve Reich process filled with NYC fumes

Paddy Canny, the great fiddler from East Clare
Is no longer with us, but his music’s still there
He could twist a tune in extraordinary ways
It was often like music from outer space
So with this strange hornpipe we pay tribute to him
The Violas lead the tune, big fiddles if you will
The tune drifts around then climbs up high
Until Canny’s grand-daughter Eimear wishes him goodbye
With her harp ascending into space

In Irish academia, there’s long been a debate
Have the Irish ever produced a composer as great
As Bach or Beethoven, Mozart ét al
The academics answer is ‘No, we’ve feck all’
But within our tradition we have composers so great
They’d be world famous, if they’d learnt to orchestrate
To me Paddy Fahey’s the king of them all
He comes from East Galway, but he’s played in Feakle!

He came from a place called O’Callaghan’s Mills
And it’s around that area he developed his skills
Unlike most Irish flautists his flute wasn’t made of wood
It was silver and keyed, but play it well, he could
Play it well enough he could to join the Tulla Ceili Band
And become renowned all across the land
He composed a few tunes that might be known to you
He was the late, great Paddy O’Donoghue

Imagine, if you will, an unorthodox scene
The Kilfenora Band of the 1970’s
Are somehow transported into the future
To a CMO practice in glór theatre
Undaunted, their leader Kitty Linnane
Bangs out some chords to start up the band
But the sound that comes out isn’t what she had in mind
So she starts the band again two or three times
Frustration soon takes over poor Kitty
And her chords get louder, discordant and gritty
Don’t mess with our Kitty, she’s got nerves of steel
She keeps bringing the band back to the start of the reel
Eventually she allows us into the B part
But by then most of the musicians choose to depart
So it’s left to flutes, fiddles and oboes apart
To lead us on in to Corofin Harps

Harps aren’t associated so easily with Clare
A sighting of a harp in a session here is rare
But there is at least a sporting team
Who use the harp to symbolise their dream
To bring the Sassanach sport of soccer
To the land of hurling; they must be off their rockers!
But they play with passion, dignity and heart
So please pay respect to the Corofin Harps!

Micho Whistling at the Cliff of Moher

Micho Russell was a champion tin whistler who could cast a spell on devoted listeners
So now let’s imagine he’s cast a spell on a resident of the village where he once dwelled
Etain McCooey gets possessed one night in her home in Doolin by Micho’s spirit light
As the waves lap gently against the sea shore he directs her towards the Cliffs of Moher
The waves start lilting a strange little tune over which Etain’s whistle starts to croon
The notes she plays come from the Other Side where our dear Micho now resides
The ghostly tune takes hold of two more, the CMO flautists who we all adore
Aisling Agnew and Eimear McGeown, are soon at the Cliffs whistling over the drone
Of pipes regulators, basses and cellos, all sorts of strange noises are concocted and bellowed
The waves get bigger as the tunes intertwine in an orgy of sound that seems to stop time
Then the mother of all tsunamis arrives and brings our whistlers to meet Micho
on the other side.

Down by Lough Rask, I bask
In the moonlight glow
That illuminates Ballyvaughan
At Midnight
On a clear night
You can clearly see all the stars
It is in these quiet moments
In this peaceful idyll
That I find my inspiration
For slow, slow music

Anyone who visits asks me, ‘How did it come to be like this?’
‘Such a barren, limestone landscape?’
The official explanation is surface ‘denuding’
The ancient farmers couldn’t have foreseen
That by ruining their land, they’d create such beauty
Which thousands would come from across the world to see
In between the barren burren rocks there’s life to behold
Little creatures scurrying around underneath
The barren burren oboe-ground.

Down by Bell Harbour there’s a legendary name
That of the Droneys, a family famed
For a household where music abounds

In a county filled with concertina styles
This family stands out by a country mile
For their unadorned, rhythmic, dancing sound

Chris and Francis, like father like son
You couldn’t keep track of the titles they’ve won
Nor the ladies they’ve charmed with their smiles!

I’ve exploded the tune into an orchestral score
For 70 musicians to belt out
So the Droney sound may not be to the fore
But feck it, that’s just what came out!

As an epitaph to the story of this tune
It’s important and interesting to note
That Francis’ wife Aíne McGrath
Is playing fiddle with the CMO!

If it wasn’t for our Aer Lingus friends
We’d have spent so much money on flights
The chances are we couldn’t hire glór for tonight!

It’s a small token of thanks to our flight sponsors
And our main contact there; a fervent supporter of Irish music
His first name’s Michael.
He knows who he is

Of saxophones, trumpets and flugelhorns
Double basses, brush kits and Arch-Top guitars
The Irish jazz cognoscenti congregated here
For a mere two years
But it was special ‘The Jazz’

After class in the closest pub to New York
There were late night jam sessions
Where jazz intertwined with trad
Frank Kilkelly was in his element
Back then I could hear some tenuous link
Between these two traditions
But it’s only when I heard Neil Yates
Play trad trumpet like Miles Molloy
That it finally all fell into place
Jazz and Trad merge into ‘The Trazz’
When it’s done right, it’s pure joy

The Mullah of Mullagh

Junior Crehan of Bonavilla in the Townland of Mullagh
Was one of these patient composers
For he left us just 20 tunes.

Though he’s bidden Farewell to Milltown Malbay from the Mist Covered Mountain
In the Hills of Coore as Her Golden Hair was Running Down Her Back
Junior still speaks with us through his music.

He was a master of Irish music – The Mullah of Mullagh

I wonder if Willie Clancy, that great master piper
Ever experienced a heat-wave like we had this July?
It was an odd experience for the festival in his name

So whilst it was nice to experience
Willie Clancy’s Milltown Malbay Heat-wave
Next year I’ll be praying for rain!

For he’s not just a glorified metronome
Without him we may as well stay at home
He gives us belief and energy
So let’s pretend he’s from Quilty!

Past the midnight hour during Willie Clancy Week musicians emerge from the cracks
They hop on buses, cramp into cars and head for the Hills of Coore
They congregate in McCarthy’s Bar for tunes, pints and craic
Busloads are still arriving there at a quarter before four

There’s one lady who’s always there earlier than most
If you didn’t know any better you’d think she was the host
She’s just mad for tunes, pints and craic and plays for hours aloud
She plays and plays oblivious to the sardine tin can crowds

Tara starts us off, plays the start of the tune
Then transfers it to Aoife, until it spreads around the room
The tune is thus repeated through all the CMO sections
Until the very end we’ll leave you with no question

That tonight you have witnessed something new, something profound
A philharmonic orchestra with a distinctly Irish sound

So all that’s left to do is to give thanks so sincere
To all of our musicians, sponsors and volunteers
Without whom this piece would have never come to life
Without whom we couldn’t have organised this night

And lastly we must generate ginormous gratitude
To a man who deserves sainthood or at least beatitudes
So raise a glass to Eamon of the O’Donnell clan
He’s our manager, our mentor and our biggest fan 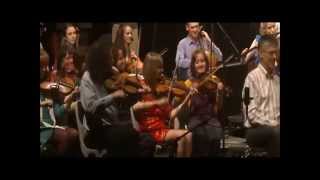 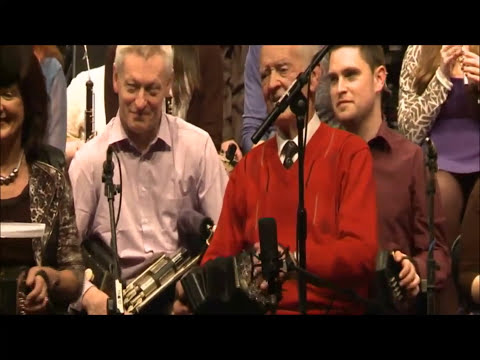 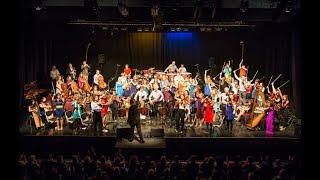 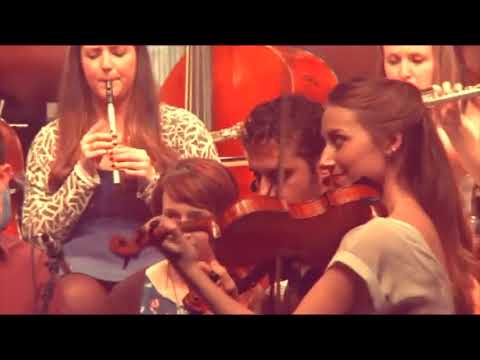