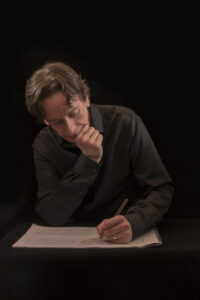 Dave Flynn is available for private lessons and public lecturing on the subjects of composition, guitar, Irish traditional music, classical music, orchestras, and ethnomusicology. To enquire, send a message to him via the Contact Page.

An experienced educator, Dr. Flynn has taught guitar and composition privately and in colleges/schools. He has organised and led numerous outreach schemes and community orchestra initiatives.

He has guest lectured in universities and societies around the world, including in the USA, Japan, UK, Russia, Romania, Estonia, New Zealand, Germany and Ireland.

Below are some video and audio examples which display Dave’s easygoing and informative lecturing and teaching style. You can also watch his Na Píobairí Uilleann ‘Notes and Narratives’ lecture about composers of traditional Irish music by clicking here.

View videos Dave made as Dún Laoghaire Rathdown Musician in Residence where he discuss the process of composing and each week he discusses a different style of guitar music – taking in Classical, Celtic, African, Jazz, Rock and even Heavy Metal!