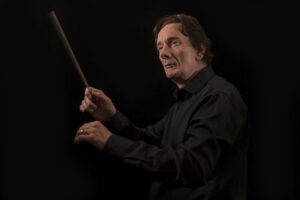 Dr. Dave Flynn is the Founder and Music Director of the Irish Memory Orchestra. Since founding the orchestra in 2012 he has overseen their development from a small regional chamber orchestra on the West Coast of Ireland to an internationally renowned orchestra that has been acclaimed in performances from London to South Korea. He has developed an entirely new repertoire for this exciting genre-blind orchestra and pioneered their unique instrumentation and memorised performance practices. He has overseen all of the orchestra’s innovative outreach work, including their astonishing ‘Vision Symphony’ project which has enabled dozens of blind and vision-impaired musicians to perform with an orchestra for the first time.

In 2017 he made his concert conducting debut with the orchestra, most recently conducting them in the premiere of his revised Vision Symphony in Galway’s Black Box Theatre in April 2022. Prior to this, he acted as assistant conductor to principal conductor Bjorn Bantock whilst fulfilling the role of principal guitarist. As assistant conductor since 2013. he has conducted many rehearsals with professional musicians, apprentice musicians and the IMO Singers. He has also overseen the orchestra’s annual ‘Apprentice Schemes’ since 2013, which have trained hundreds of musicians of all ages in the Irish Memory Orchestra’s unique performance practices.

An active guest conductor, guitarist and composer, he has worked with ensembles such as the RTÉ Concert Orchestra, Irish Chamber Orchestra and Crash Ensemble, as well as conducting world premieres of his own compositions with the Oriel Traditional Orchestra and the Community Rhythms Peace and Reconciliation project in Omagh, Northern Ireland.

He has a Doctorate from TU Dublin Conservatory of Music & Drama. His dissertation, entitled “Traditional Irish Music: A Path to New Music,” is a much cited thesis which has had profound impact on positively changing the perception and understanding of traditional Irish music within classical music.

He has studied conducting with David Brophy, Sineád Hayes and Robert Houlihan, composition with Malcolm Singer and Dr. Gráinne Mulvey and guitar with Dr. John Feeley.

His compositions are published by Mel Bay, Reed Music and Frisbee Publications. 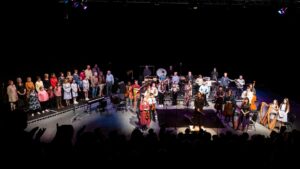 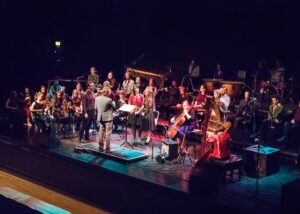 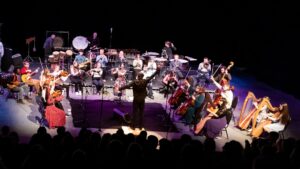