‘….a magnificent new work for fiddle, violin and guitar’ – The Irish Examiner USA

In 2001 my mother Joan Jennings died from cancer aged 55.
In 2005 my aunt Catherine Flynn died from cancer aged 65.
This piece is my way of trying to come to terms with their untimely deaths and to ultimately celebrate their lives through music. I hope that it may also serve a similar purpose for those who listen to it in that it can be a celebration of those who have departed from us all.

The piece is a continuous suite in seven movements, each of which makes up an emotional state which one might go through when coming to terms with the death of someone close.

The piece begins with an unusual mournful air which is played three times on the fiddle. The first time round it is solo/unaccompanied, second time round the guitar begins a spare accompaniment and third time round the violin enters with eerie harmonics and so the music builds into the next movement.

After the initial grief of death it is common for those grieving to go into shock. When someone is in such a state of shock they tend to be physically static or numb but their mind races with repetitive thoughts. So with this movement I echo that feeling with the repetition of a ‘fragment’ of a melody which eventually develops into a five part Reel. This Reel develops over pulsing guitar chords and sustained violin harmonies somewhat similar to the drones and regulators of Uilleann Pipes.

The ‘Shock’ Reel is repeated three times and gradually builds into a furious anger. As the music reaches its climax the violin takes over with a cadenza filled with Vivaldi-like arpeggios based on modes and rhythms commonly found in traditional Irish music.

The ‘anger’ cadenza gradually dissipates into a slow arpeggio in a jig rhythm which eventually merges into a slow mournful Slide (in 12/8 time) played on the fiddle. Tears are represented by both the mournful nature of the tune and the use of harmonics in the guitar and violin accompaniment. The accompaniment gets gradually more elaborate as the ‘Tears’ Slide is repeated a number of times.

Following the ‘Tears’ Slide comes a form of tune I like to call a Slip-Slide, which is as the title suggests an amalgam of a Slip Jig and a Slide, i.e. a bar of 9/8 followed by a bar of 12/8. The nostalgic sense to this tune is eventually enhanced with the use of canonic counterpoint whereby the violin plays the tune a beat after the fiddle thus creating a form of echo of the past.

Following the nostalgia comes a feeling of determination that life must go on, yet it is very hard to let go of the bitterness that went before. So this movement reflects this musically by way of an unusual Reel which has a lot of dynamic tension, particularly enhanced by the guitar and violin accompaniment.

Once grief, shock, anger and bitterness can be overcome then it is time to celebrate the great things about those who have departed and so after all the mournful and angry music that has gone before comes a joyous ending with a Barndance which quickly turns into a Reel in the shining bright key of E Major. As the Reel progresses over a joyous chord progression the violin changes from Uilleann Pipes-influenced drones into a counterpoint melody to the fiddle Reel. Towards the end both instruments go into higher registers with canonic counterpoint enhancing the joyous feeling until the end.

While much of the music in this piece uses traditional Irish musical forms, no traditional melodies are used, in other words all the music is newly composed.

‘Music For The Departed’ was commissioned by West Cork Music for the 2006 Masters of Tradition Festival in Bantry, Cork.

It received its US premiere in April 2010 at the Irish Arts Center.

Another version exists with orchestra accompaniment. 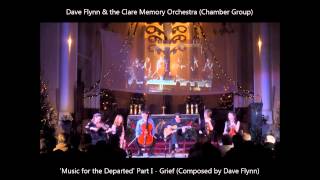 Music for the Departed