These are the first etudes that I have composed for the late Charles Postlewate to aid his pioneering work utilizing the five-finger right hand technique and each is designed to aid the development of separate techniques using the little finger. I am very sympathetic to Charles’ ideas because I have used the little finger in my playing and in some of my previous compositions.

Etude No. 1: ‘Gimme Five’ is mainly concerned with the development of arpeggios utilizing the little finger. The 5/8 time signature is used here because it naturally fits the five fingers in a way that will make an unusual rhythm for beginners seem quite natural. I feel that early exposure to irregular time signatures will aid the student’s development and they will come as naturally to the advanced student as the five-finger technique. I have encountered many technically-advanced players who find irregular time signatures extremely difficult due to the lack of exposure in early  training.

Etude No. 2: ‘Homage To Bucko’ is concerned with one of the main advantages of the five-finger technique – unbroken five-note chords. The last chord is sounded by a sharp upward stroke with the c finger on the first four strings while the thumb sounds the bass-note A when the c finger reaches the fourth string. This technique can originally be found in my pieces ‘5to9’ and ‘Passacaglia’. Jazz harmonies highly influence this piece and I write it in homage to the renowned Irish jazz guitarist Hugh Buckley, who helped develop my interest in jazz.

Etude No. 3: ‘The Odd Reel’ is a stepping stone to a fluid tremolo utilizing the little finger. However there isn’t a continuous tremolo in the manner of Tarrega and Barrios, rather there is more of a relation to the triplet ornamentation found in the traditional music of my native Ireland. It is called the ‘Odd Reel’ because it is based on the rhythm of the Reel dance-form which is normally in 4/4, in this piece extra beats are added occasionally, taking away from the regularity of the 4/4 metre.

Etude No. 4: ‘Static Slip Jig’ is based upon the traditional Irish slip jig in 9/8 time (3+3+3) The 9/8 feel of a slip jig is quite different than that of a Baroque gigue. This etude will help develop the dexterity of the right-hand immensely if the exact fingerings are followed, and the relationship between the thumb and all four fingers will be developed, as will the relationship of c to a, a to m and m to i.

These pieces were first published by Mel Bay Publications in an anthology of new music collected and commissioned by Charles Postlewate called ‘Contemporary Anthology of Solo Guitar Music for Five Fingers of the Right Hand’.

You can purchase the book by clicking here. http://www.melbay.com/product.asp?productid=21290

You can also hear demo recordings of me playing the works on this page. 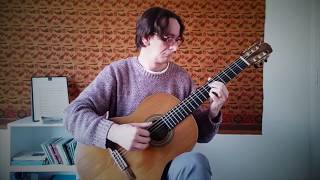 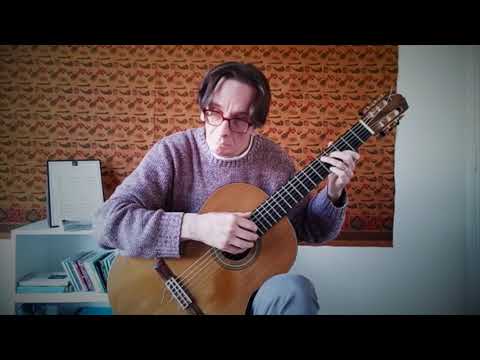 Etude No.2 ‘Homage to Bucko’