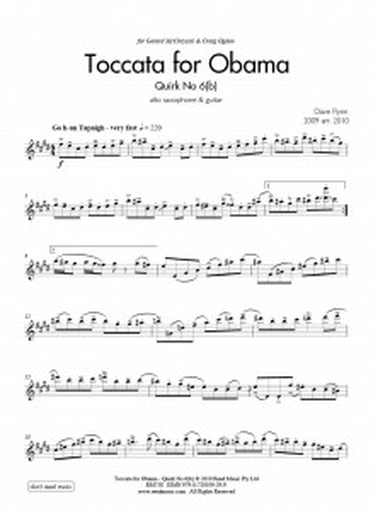 In January 2009 I was in Times Square, New York when Barack Obama was inducted as President of the USA. There was a great sense of joy and unification in the crowd gathered there and in Washington. My feeling that day was, no matter what President Obama did in his time as President, he had already achieved more than any president in my lifetime. He’d brought a sense of hope and optimism to millions of people around the world.

One African-American beside me summed up the feeling when he spontaneously yelled, ‘For the first time in my life, I feel like I can achieve anything.’

This piece was written soon after as a tribute to President Obama. It is a short piece which goes through a number of different styles which reflect President Obama’s heritage. There are references to Irish, Indonesian, Kenyan and American music styles, the latter being jazz. The piece ends with a Balkan flavour. I don’t think President Obama has any Balkan heritage, but it’s a fun way to end the piece and reflects the fact that the piece was first written as a violin and guitar piece for a concert I performed in Romania with the Irish-Romanian violinist Ioana Petcu-Colan.

I began the orchestral version of the piece in 2012, left it aside and then finished it in 2020. My motivation for finishing it was witnessing how far the US had fallen under President Obama’s successor, as the 2020 election loomed. The piece now holds a sense of nostalgia for me, reflecting better times and a renewed, urgent hope for change.

Prior to this I’d made an arrangement for alto saxophone and guitar especially for Gerard McChrystal and Craig Ogden who have performed it a number of times. This version of the piece has been published by Reed Music in Australia. It can be purchased here.