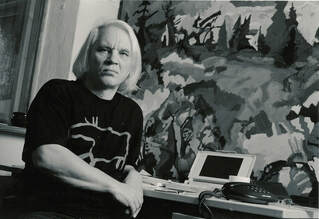 In 2009 I visited Finland to research how Finnish composers had been influenced by Finnish traditional music. I met some very interesting musicians and composers, including Pekka Jalkanen. Jalkanen often composes for the kantele, a traditional Finnish instrument, something like a harp mixed with a Japanese koto. The instrument makes a really beautiful sound and it influenced the great Jean Sibelius, who even wrote a duet for violin and kantele.
​

Jalkanen composes music that lies somewhere between Arvo Part and traditional Finnish music, although he has a lot of influences from ancient music traditions around the world too. He has composed a wonderful Concerto for Kantele and String Orchestra, unfortunately I couldn’t find it anywhere online. I have a CD of it which I got in Finland. I did find some of his kantele music at the concert below. The link starts at a haunting piece, ‘Tähdet’ .

Jalkenen is one of the most under-rated Finnish composers alive today. He told me his style of music took a long time to get accepted in Finland, as atonal modernism was the dominant style when he began working in this style and people mocked him for writing tonal and modal music. Since I met him it seems he has gained more acceptance as he was awarded the State music pension in 2013, the same award given to Sibelius many years ago.

I heard some of his other music at the Finnish Music Information Centre, including a great minimalist string quartet, but that does not seem to be available online either! Jalkanen is waiting to be discovered outside of Finland. He could be the next Arvo Part if some enterprising publisher or record company took the time to discover his music and release it to the wider world.

The video below shows another piece for the imaginative instrumentation of kantele, guitar and harpsichord which is a very original fusion of Finnish kantele, Japanese koto music, Baltic minimalism and baroque music!

​Hypnotising and meditative in the very best sense.