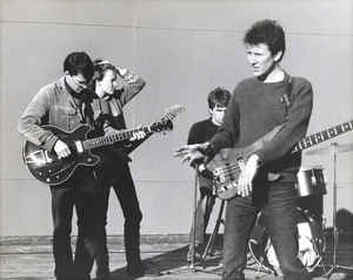 This week a detour from classical composers and trad fiddlers into indie rock. Ordinarily I wouldn’t post something from an indie band here, but my very recent discovery of the New Zealand band ‘The Bats‘ has changed that, because they are a great, innovative band started in the ’80’s who aren’t as well known as they should be.
​The band’s singer/songwriter Robert Scott, also plays bass in the influential band The Clean. Though the bands are from Christchurch they are associated with a scene called the ‘Dunedin Sound’.

This developed in the late 70’s/early 80’s in the small college city of Dunedin right at the south of New Zealand’s South Island. The scene was, in effect, created by the label Flying Nun, who released lots of records by bands associated with the scene. The label still exists and The Bats are still on the label, going strong 40 years later and still making great records!

It escapes me why I hadn’t heard these bands until literally last week as it turns out they, and other Dunedin bands, were hugely influential on a lot of American bands in the ’80’s and ’90’s including R.E.M. and Pavement. They’ve also influenced more recent bands like Real Estate, The Strokes and Phoenix.

Listening to their early records now you can hear why. They took 60’s influences from the Velvet Underground and The Byrds to create jangle pop and lo-fi rock sounds that are really distinctively from New Zealand.

The closest sound I can relate to these bands is the cult Australian band ‘The Go-Betweens‘. There’s something commonly wide-open space, sunny yet nostalgic about their sounds. Below are some videos by the Bats including three 80’s tunes and three more recent tracks. If you’re familiar with modern bands like Real Estate you might see how the Bats sound and image influenced them. Also worth noting is the very moving video for ‘Simpleton’ set in the aftermath of the Christchurch earthquakes.

If, when you listen to these tracks, you think they sound familiar, it’s not because The Bats are copying anyone, this is their own sound that has traveled from 1980’s New Zealand to influence countless bands, whether the bands know it or not!