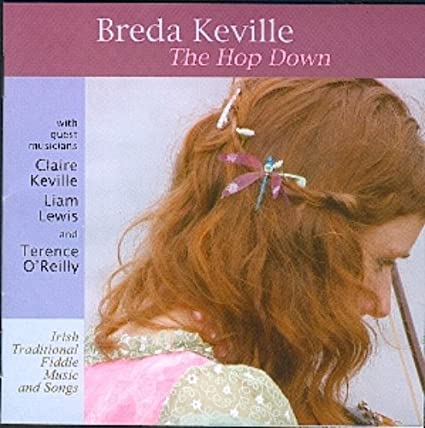 ​Anyone who’s followed my music over the years will know my favourite Irish composer is Paddy Fahey. 15 years ago, as I was developing my Fahey obsession, I was introduced to the unique fiddle playing of Breda Keville.

There are literally hundreds, if not thousands. of excellent Irish fiddle players, so it takes something special for one to stand out. Whilst many try to impress with flashy, virtuoso playing, Breda does the opposite. She plays slow, soulful fiddle music in a style that is unlike any other fiddle player I’ve heard.

Her only album to date is ‘The Hop Down’, from 2006. On it she plays several Paddy Fahey tunes really hauntingly. Breda has a yearning style perfectly suited to Fahey’s music and indeed the general music of East Galway and East Clare.

To me, no one plays this kind of music better than Breda Keville., yet perhaps because music isn’t her profession, she is probably only really known to real aficionados of Irish traditional music.  Breda’s playing had a strong influence on me when I was making my 2009 album ‘Contemporary Traditional Irish Guitar’, some Fahey tunes I learnt from her album are on that record.

The Hop Down is not available as a download or streaming album, so if you don’t have the CD, it can be hard to get to listen to it. The youtube clip below though of Breda playing live in Galway is a great example of her playing.

​I hope she has another album in the pipeline as it’d be great to see her receive more recognition for her unique style and musicianship.