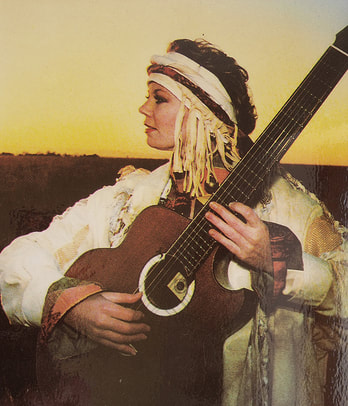 ​This week’s post is about the South African guitarist/composer Avril Kinsey, who is one of the most inventive composers of modern classical guitar music.

​She is well known in South Africa, yet isn’t as well known as she deserves to be elsewhere.

Around 20 years ago I bought her book ‘Guitar Music from Africa’, a wonderful collection of original compositions and arrangements.

Watch this short video below about it.

I especially like her composition ‘Song of the Water, Mokoro’, a piece I learnt and played as a classical guitar student. Avril comes up with very imaginative ways of creating sounds of the South African bush, to create her own unique voice in the classical guitar world. Watch the video below of her playing this piece to see how she recreates bird sounds and the sound of a boat going through the reeds.
Avril’s approach to recreating natural sounds on the guitar inspired me recently when I was composing the piece ‘Dún Laoghaire Harbour’. I adapted her ‘boat in the reeds’ technique to create the sound of boats creaking in the harbour.  When she does the reeds technique she moves her finger up the fingerboard. I got the creaking technique by doing that and coming back down again with my nail hitting off the frets, in a rhythm approximating what a creaking boat sounds like.

I was also inspired by the way she gets bird sounds, however I don’t use the same left-hand finger-nail technique she uses, instead I use a spoon!

In ‘Song of the Water, Mokoro’ she also uses bell-like string harmonics to create an atmospheric texture, harmonics are a very common technique used by everyone from Segovia to The Edge, but Avril’s way of composing with harmonics is quite distinctive. I use harmonics in ‘Dún Laoghaire Harbour’ in my own distinctive way to recreate the sound of ship halyards clanking in the harbour.

My Mum always said to me, you should always give credit where credit is due, so that’s partly what this post is about. Without Avril’s inspirational and inventive music I wouldn’t have composed ‘Dún Laoghaire Harbour’. She’s a treasure of the classical guitar world that deserves a wider audience.
​
​Learn more about Avril on her website here – www.avrilkinsey.net