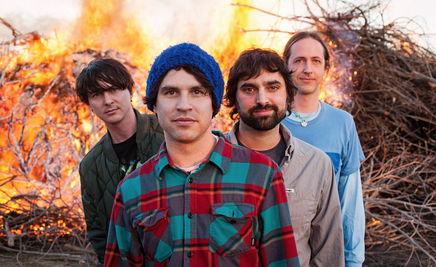 In certain quarters, the Baltimore band Animal Collective are very well known. They headline alternative music festivals and fill relatively large venues. However they’ve never really entered the mainstream and aren’t as well known as they could be. To me, they are The Beatles of the 21st century. Their albums Feels. Strawberry Jam, Merriweather Post Pavilion and Centipede HZ are the 21st Century equivalent of The Beatles’ great records Revolver, Sgt. Peppers, The White Album and Abbey Road.

They mix memorable pop hooks with psychedelic experimentation and contemporary song styles. Their records contain many mood shifts, taking in a myriad of styles. Some accessible and poppy, others mind-expanding and outright weird!

As with The Beatles, Animal Collective is a fab four containing two outstanding singer-songwriters in Avey Tare (Davey Portner) and Panda Bear (Noah Lennox). They also have a mysterious guitarist who contributes a great tune every now and then,  Deakin (Joshua Dibb). It would be unfair to label their electronic wizard known as Geologist (Brian Weitz) as their Ringo Starr, but in a way they are similar as their inputs are misunderstood and under-appreciated. Ringo was a great drummer and gave The Beatles some of their charm, Geologist is a great sound artist and his image and on-stage-persona is part of Animal Collective’s charm.

Animal Collective’s 2020 E.P. ‘Bridge to Quiet’ is not their most important release, however it is a reminder that this ever-inventive group are still a vital creative force 17 years after they formed. I particularly like the way the songs Rain in Cups, Piggy Knows and Bridge to Quiet each morph from meandering experimental electronica into catchy indie pop songs. The pop songs emerge out of fogs of seeming nothingness with glorious beats and hooks.

When I first listened, I was afraid it was going to be one of their mainly instrumental, experimental releases which don’t do much for me. But I kept listening and was gradually hooked into the first track Rain in Cups. Like a lot of Animal Collective tracks, it’s hard to define, it’s unconventional, yet the band’s gift for melody and inventive beat-making make it more interesting to me than 99% of modern indie/alternative bands.

If you are familiar with their work and haven’t heard ‘Bridge to Quiet’, I recommend checking it out.
If you’re not familiar with them, maybe check out their classic Merriweather Post Pavilion album first and the Fall Be Kind E.P. before plunging into this slightly more experimental E.P.

On a side note, it may be a surprise to some who know me that I’m endorsing a band who often engage in experimental music. However, I am a fan of experimental music so long as it has some kind of memorable musical content. A lot of experimental music I’ve heard seems experimental just for the sake of being experimental. Animal Collective, at their best, show how it’s possible to be experimental whilst creating some really memorable, enjoyable music. Some of what they do is very quirky and poppy, like the chorus to ‘Piggy Knows’, while other tracks of theirs are just awe-inspiringly original and creative to my ears.

Animal Collective are among the 21st Century’s greatest composers, regardless of genre.  Bands like them don’t come along very often and it’s great that they are still pushing boundaries and painting strange new sound-worlds for adventurous ears!