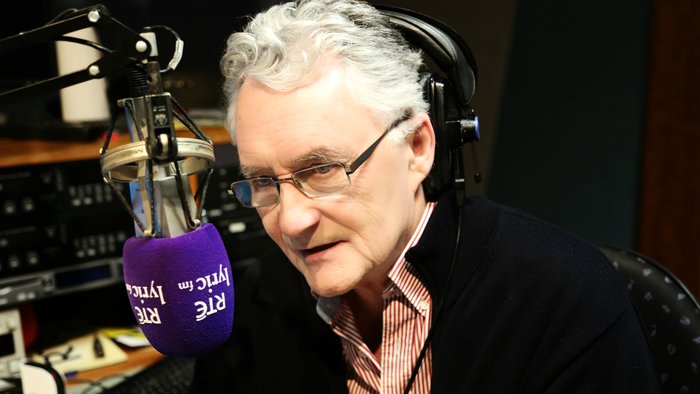 Tonight, 11th July 2017 at 10pm Ireland’s finest radio broadcaster Carl Corcoran will, for one last time, present The Blue of the Night on RTÉ Lyric FM.

It is a sad and momentous moment for Irish music.

No other broadcaster has given so much support to Irish musicians as Carl has done over the past decade on this seminal late night radio show.

I’m just one of countless Irish musicians he has regularly played side by side with J.S. Bach, Miles Davis, Joni Mitchell, the Bothy Band and other musical legends from across the wide spectrum of classical, traditional, jazz, folk, pop and other music from around the world.

Beyond that, no other broadcaster I’ve heard has Carl’s ability to mix these vastly different genres so seamlessly that you rarely, if ever, feel compelled to ‘touch that dial’.

Carl’s abilities as a broadcaster are literally second to none. Being a night owl who travels a lot I’ve heard late night radio on stations across Europe, the USA, New Zealand and Australia. Whilst there are some excellent broadcasters like Verity Sharp on BBC’s Late Junction and WNYC’s John Schaefer, Carl easily holds his own at the top of the list of international late night broadcasters. It’s no wonder people tune into him all over the world.

Carl is a sorcerer of sound, a living sound-cloud, a masterful genre-hopper who can make sense of the muddled puzzle of a Spotify-fueled modern world so full of music it can be hard to know where to begin at times. Now that he’s leaving Lyric FM, against his will, there’s a huge hole to fill. I don’t envy the person who has to take over from Carl. His boots will be as hard to fill as Alex Ferguson’s were at Man Utd, a poisoned chalice if ever there was one. His replacement could become known as the David Moyes of Irish radio……..

Thank you Carl Corcoran for your many years of support and brilliant broadcasting, your warm radio voice will be very, very sadly missed. Go n-éirí an bóthar leat………….

Epilogue: Messages in a Blue Bottle

Just as a mark of the man, I’d like to share two emails Carl Corcoran sent me ‘out of the blue’ in 2010. I’m sure he won’t mind me sharing this correspondence.

The first email I ever received from Carl is the first correspondence I ever received from an Irish broadcaster (unless a childhood autograph from Mike Murphy counts!). Carl’s email came after my friend and former manager Eamon O’Donnell, unbeknownst to me, called into RTÉ with one of my CD’s. As fate would have it, it ended up on Carl’s desk and he’s been playing my music ever since.

Hi Dave,
I received a copy of your CD  “Contemporary Traditional Irish Guitar”
– dropped into Donnybrook. I don’t know if you arranged/did that – but
many thanks. I have enjoyed listening to it and will be adding it to
the Playlists in the coming weeks.
Kind regards,
Carl

Many thanks for your email. Great to hear from you and I’m delighted
you enjoy my CD. I’m honoured that you are adding it to your playlist.
I often drive late at night after gigs and sessions and tune into the
Blue of the Night, so I look forward to hearing myself on your show
some night!

Email 2: The Warmest and Heartiest of Praise

Carl stayed true to his promise (not all broadcasters do) and he has played my music far more than any other broadcaster. Many musicians will tell you the same of their music. His support led me to invite Carl to the premiere of my fiddle concerto Aontacht, performed by Martin Hayes and the RTÉ Concert Orchestra at the National Concert Hall later in 2010.

Dave,
Heartiest congratulations on last night’s SPECTACULAR! It was seriously excellent. Like you, I have the highest regard for the talents of Martin, and the magic of Hayes and Cahill. To hear them, and the music, in the context of orchestra was an exhilarating experience. Your composition and arranging skills captured the essence of the music and the musicians better than any such trad/classical combinations I have heard. The “marriage” of the genres was true to the spirit of the music and the tradition – well done. This was achieved mainly due to your knowledge of the music, your innate sense of music and your talent as an arranger/composer. Due praise should be heaped on the composer, soloists, orchestra and very especially for David Brophy whose enthusiasm and passion for the works infused the musicians on the stage and the audience alike.
Thanks for the opportunity of being present for this unique experience. I look forward to a recording of the works, which I hope is imminent.
Kindest regards and continued success.
Carl

I received many messages of congratulations after that concert. None were as, knowledgeable and heartfelt as Carl’s. His warm, genial, velvety voice reflects the man he is.

p.s. to Carl – A recording of the works was imminent but unfortunately still hasn’t seen the light of day and I don’t know if/when it ever will, but that’s another story involving the lack of foresight of the Powers That Be in RTÉ which you may be able to relate to!!!!!!